I was able to finish out the wireframe for the Player Overview screen, and I'm pretty happy with it. I think it has everything we need to get player info at a glance.

Now I need to deal with the actual design–colors, typography, and just stuff to make it pretty and enjoyable to use. There are a lot of considerations for the design. The art style of the player and GM images will probably dictate quite a bit. Another big consideration is the fact that every team will have a different logo color scheme. So, if you commit to a color scheme that is too colorful, it could clash with the logo colors and look kind of funky.

I started messing around with a blue color scheme that I borrowed from a design on Dribbble. The designer who used it for a finance dashboard made it look pretty rad. I don't think it will work for what I'm going for, though: 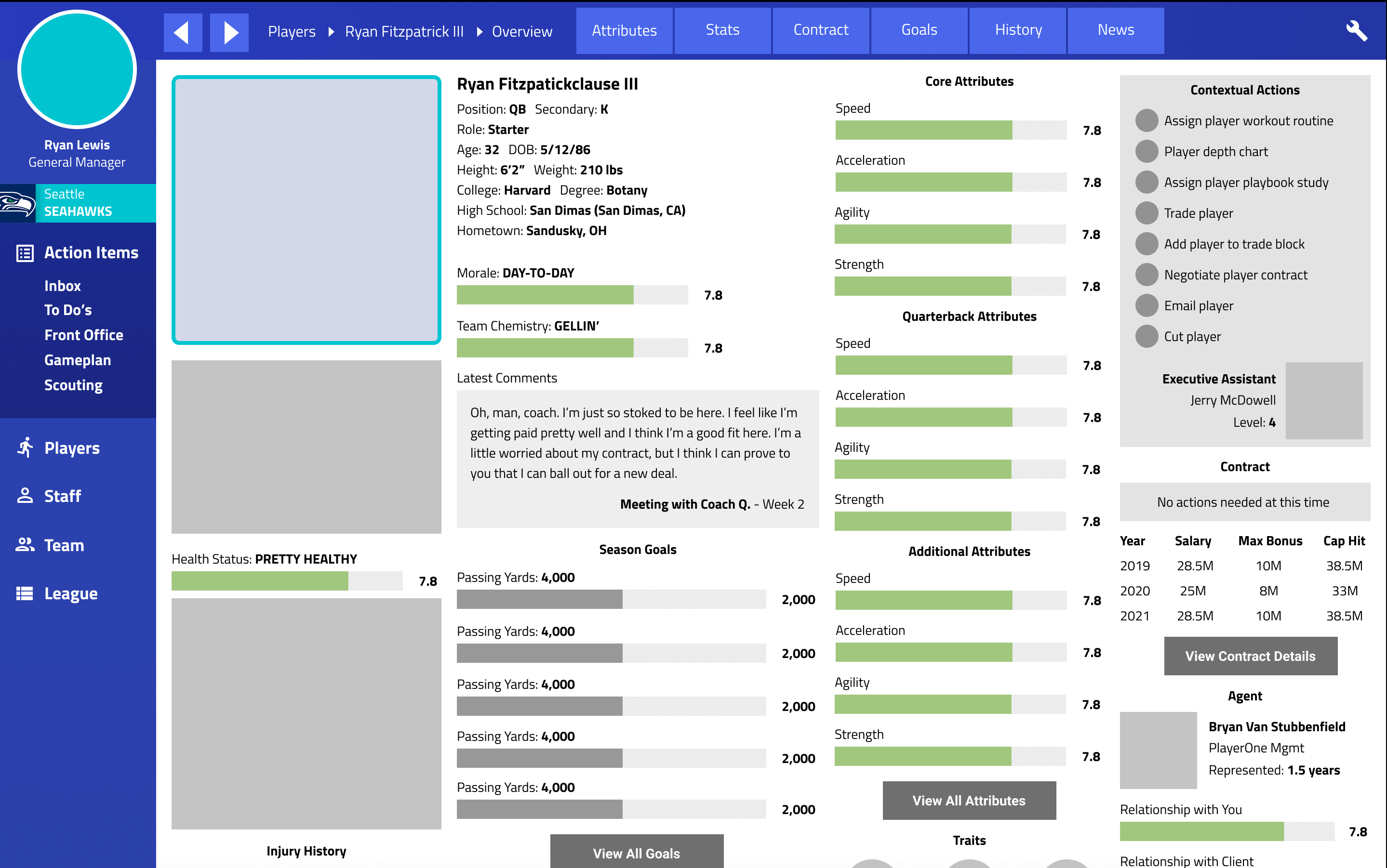 A little too blue...

It's tough being not super strong in a single aspect of game dev. I'm an OK artist, if I keep the art style within super basic limits. I can code well enough to make most of the things I'm trying to add in work. I can also do the other stuff: design, writing, music, marketing, etc. as well, but I'm definitely a generalist. But I guess that's why I love creating in this medium.

But yeah, the tough part is probably most evident in the art. I totally understand why a lot of indie devs go the pixel art route. It's abstract enough to not have to be too detailed (or, at least the details have a rigid structure) and it's actually really fun and can look great. For this game, though, pixel art would just be really wonky to pull off. Text, tables and numbers is such a big part of a sports management sim game, and pixel fonts would make things a total festival of buttholes.

So, where do I go with the art style? I'm not willing to go the 3D or voxel route, because I don't know Blender and I messed around with Maya for a while and it's way too complicated for a project like this. More realistic art cant't scale...and I don't think it would fit the quirky vibe I'm wanting. So, I tried a more cartoony/comic-y style... 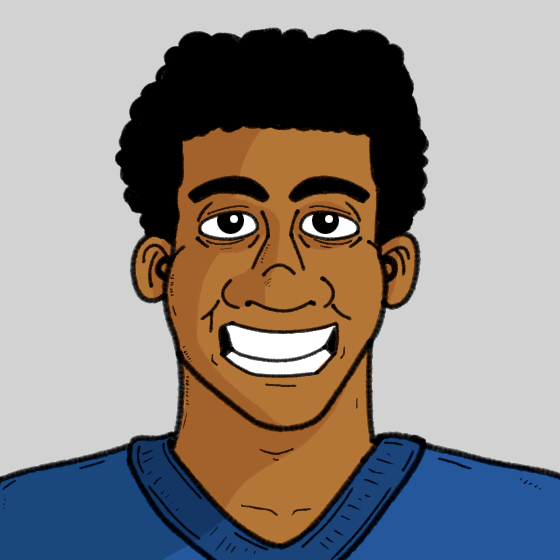 Yeah...it's pretty apparent this won't work. I have a ton of fun doing this kind of art, but it needs to be a little more abstract if I'm going to make it work for more player looks and scale properly. Also, doing shading and the whole process for, potentially, hundreds or thousands of different player features makes my head explode, so...

I think the best route is going to be a little more shape and vector driven. One example of a game that does a fun job with this is MLB Power Pros. That game had an MLBPA license and made the players super simple anime shapey characters:

My players will have noses and different types of eyes, but this level of abstraction has a ton of benefits: it's quick, scalable, fun, quirky and totally will fit the design style and tone of the game.

Today I was able to make some progress on the wireframes for the Player Overview screen that I sketched out the other day. I've still got some work to do here, but it feels good to get some of the components laid out 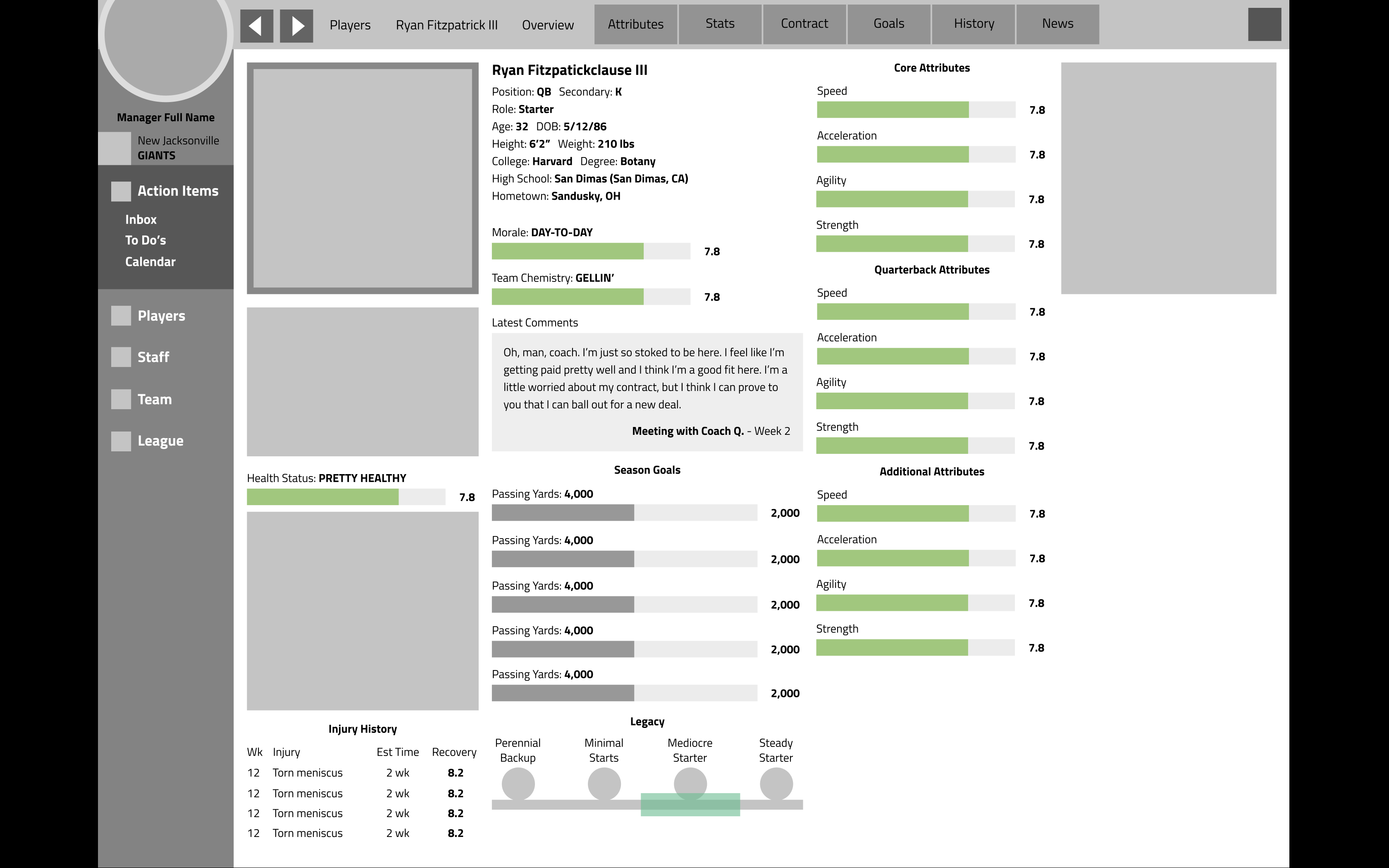 Since this is the first update, it will probably be a little more lengthy than most as I've already done a little bit of work. Also, I'll preface this by saying that starting a devlog this early on in the process might seem excessive. And it is, but so is your face! Oh, hey. I was just kidding about your face. I just get defensive when people get on my case about doing pointless work.

So, yeah. Right. There might not be a ton of value that comes from early and frequent devlog updates, but I'm a believer in "fakin' it until you make it." I feel like me writing about what I'm working on is not just a routine or an accountability kind of thing, but it's also a way for me to kind of "fake" making a game...until I make it. I think that's how that works.

Either way, these updates are probably more for me right now. But hopefully, eventually, they will be interesting to more people.

First off, let's talk paper prototyping...or, actually it's more like wireframing. I bought a new Moleskine a few days ago and I'm dedicating it 100% to layouts and ideas for Pocket Dynasty Football

Here are a few of the first layouts that I've sketched out: 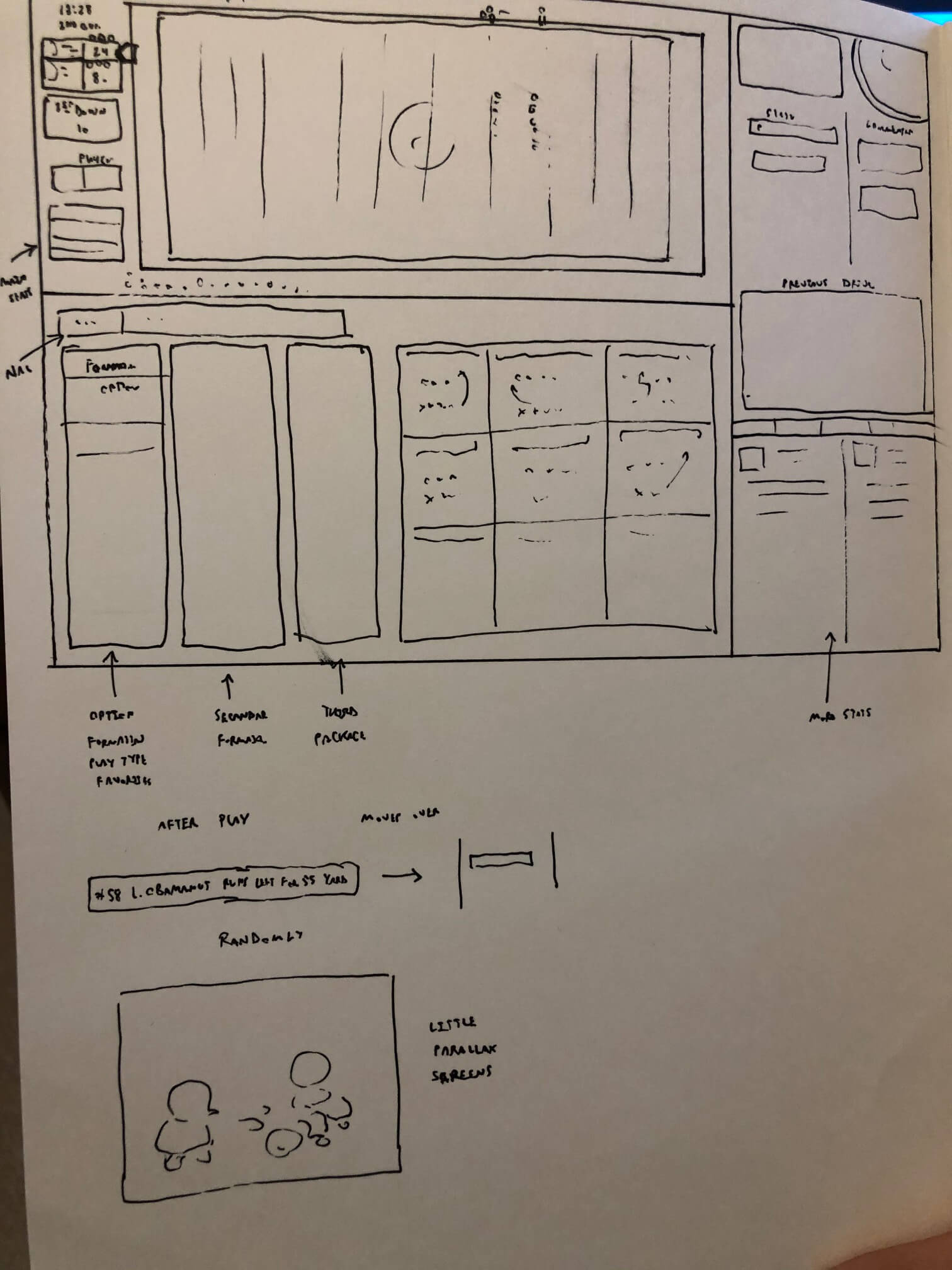 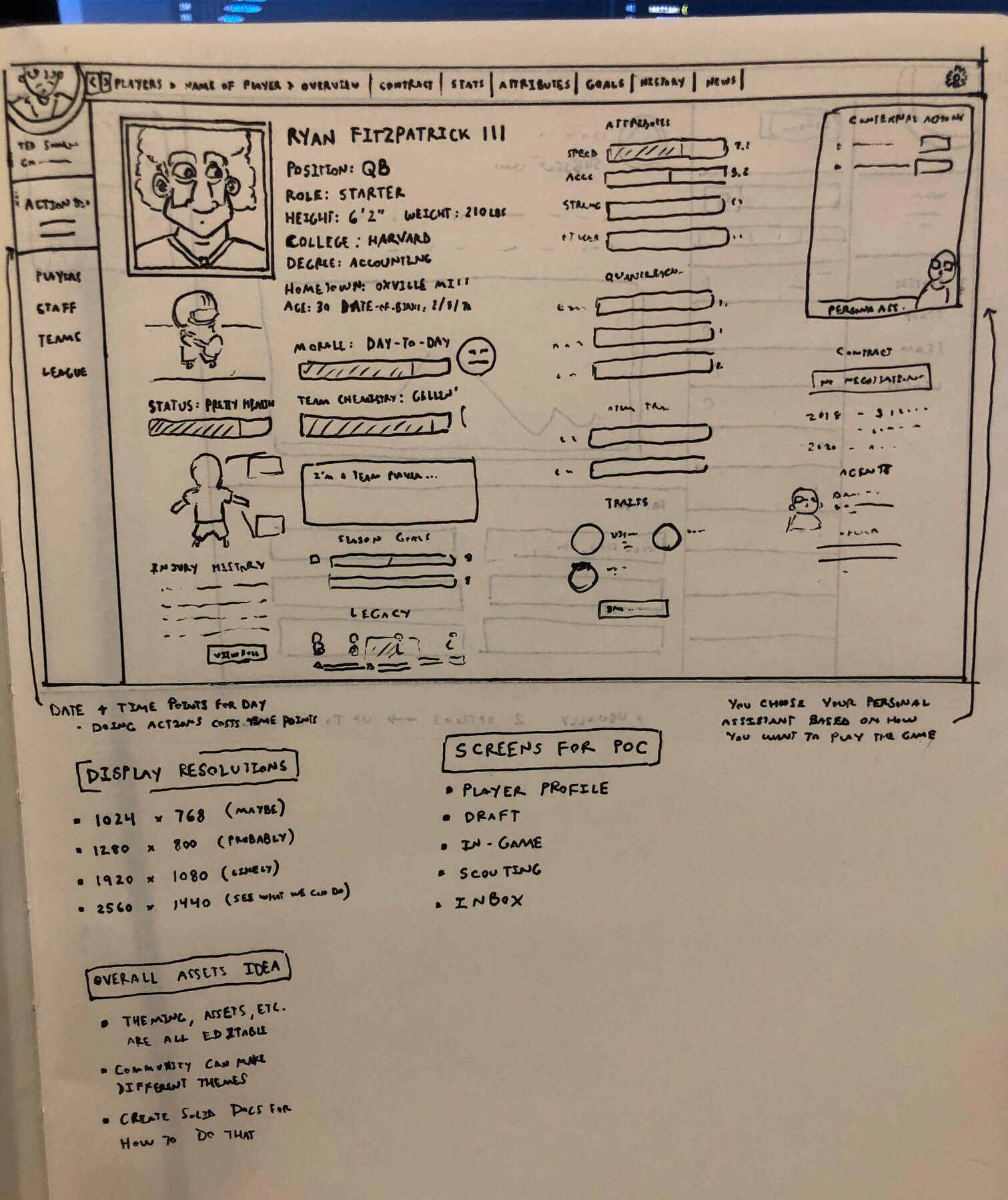 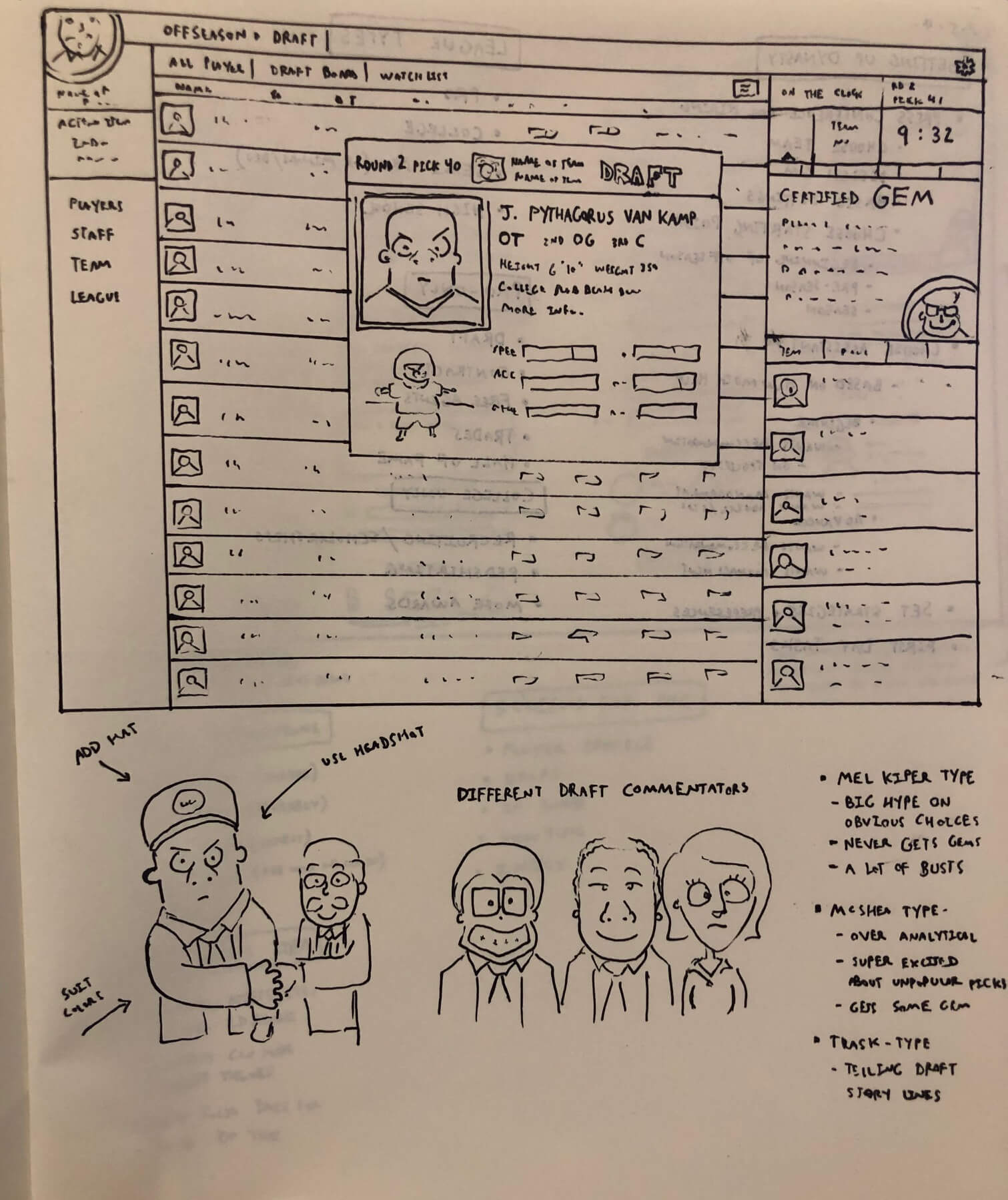 I'm working on several things in-tandem, but it's been a nice exercise to create some of these layouts on paper to wrap my head around all of the components and also to get a general idea on the art style. I've already done quite a bit of organizational brainstorming as to what content will go on each screen, but actually sketching it out makes it quite a bit clearer.

I'm sure there are a ton of other pieces here that I could expand on, but this first devlog has already taken quite a bit of time. The idea is that I just spend 15 minutes or so on this. I'll see you tomorrow.